I KNOW HOW TO COOK

I KNOW HOW TO COOK, a French cookbook by Ginette Mathiot 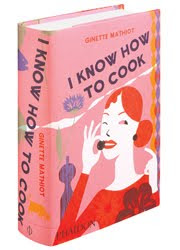 Stéphane, My grandmother, my aunts, my mother were all very good cooks and I learned a lot from watching them in their respective kitchens in both Geneva, Switzerland and in the various French cities where we lived in the fifties. But I have never seen them looking at a cookbook. Their knowledge of the ‘’cuisine’’ was transmitted from generation to generation. As far as I am concerned, I knew how to cook a few essential dishes when I was a student like a steak, an omelet, sautéed potatoes, or pasta. But it was not until we got married in Paris in the sixties, that your mother and I started to cook. In fact we had so little time in Paris and such a small kitchen, that our cooking and entertaining was relatively limited. It was not until January 1970, when we moved to Chicago and got a large kitchen that we started to entertain friends and colleagues during long and elaborate dinner parties, which implied cooking more complex and varied dishes. Your mom, who turned out to become a very good French cook, had an old copy of Julia Child’s first masterpiece and also had brought her small book of Provençal recipes written by her Provençal cooking class teacher in Aix-en-Provence where she was studying when she came from the U.S. in 1961. Me, I had only brought from Paris a very modest pocketbook version of Ginette Mathiot’s LA CUISINE POUR TOUS published in1955. I still consult it from time to time even though it is falling apart and is covered with handwritten notes, and seriously stained. It contains all the basic recipes and cooking tricks that any French home cook should know.

I had bought that book because it was a best-seller and it was cheap. At that time I could not afford Ginette Mathiot’s most famous big book, JE SAIS CUISINER that was offered to practically every new French bride between 1932 when it was published for the first time and the late seventies. Since that time it was re-edited and amplified many times and more than 6 million copies have been sold. During my last trip to Paris in September, I have seen many copies on my favorite bookstore shelves. It still sells like cupcakes. 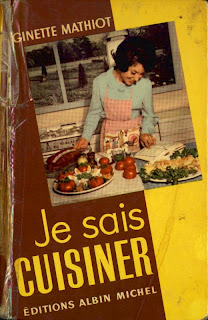 Ginette Mathiot, who was born in 1907 and passed away in 1998, was essentially a teacher even though she published more than 30 books. She taught not only cooking, but also what I would call ‘’home management’’ in public schools for many years. She ended her career as the General Inspector for House Cooking and Management for the French Ministry of National Education. She was rewarded with the medal of Officer of the Legion of Honor. The reason for her immense popularity is very obvious: She managed to calm down the anxieties of generations of French women who were very apprehensive about cooking home meals and feared the disapproval of their husbands, mothers in law, and guests, by explaining in very simple terms what they should know about making basic dishes, sauces, condiments, pastries, etc, as well as how to use cooking utensils and choose the right product at the market, as well as how to set the table.

Her motto was: Let’s simplify everything and suppress any info that is not essential to the preparation of a dish. The application of this principle is very obvious in the way she wrote her recipes that never contain anything more that what is important to know in order to be able to complete the task. In some ways she was sort of an anti-Julia Child who wanted every American home cook to be as well-versed in every food specialty as a French scholar would be, and therefore discouraged many readers who felt totally submerged by the over-abundance of information that she supplied for every bit of food to prepare.

Anyway, I had completely forgotten the existence of Ginette Mathiot when an American friend of mine, Shirley Baugher, presented me last week with a wonderful and unexpected birthday present: a copy of the recently published English version of Ginette Mathiot’s Je Sais Cuisiner, I Know How To Cook
I was taken by surprised because I was completely ignorant of the fact that this book, published by Phaidon, (from England) had been released. But knowing Shirley, who is a very good cook herself and knows a few extra things about French cooking since she studied at Le Cordon Bleu in Paris, one of the most famous cooking schools in the world, I should not have been surprised. The shelves in her beautiful kitchen in Old Town in Chicago are literally filled with hundreds of cookbooks. It is almost an addiction. She has herself published a very nicely illustrated recipe book that is a compilation of her famous and sometimes less famous neighbors and friends in Old Town: ``A Taste of Our Old Town``.

I spent some time last week-end to go through the 975 pages of I KNOW HOW TO COOK and I have to admit that the English adaptation of that beautiful book is very well-done, and should encourage many American home cooks to try and prepare French dishes. I should mention at this stage that this enormous task of not only translating, but also adapting and modernizing its content to suit the abilities of any American housewife (or man), and modernizing it, has been accomplished by CLOTILDE DUSOULIER,with the assistance of a team of translators and editors. This French woman has delighted millions of English-speaking Internet visitors worldwide since 2003 with her famous blog ‘’Chocolate and Zucchini’. She started it when she was a computer software engineer based in MountainView, CA in Silicon Valley. She lived there 3 years and then went back to Paris where she published 2 best-sellers in English : Chocolate and Zucchini in 2007, and the marvelous ‘’Clotilde’s Edible Adventure in Paris’’. Clotilde Dusoulier therefore knows from her own "on site" experience what the American cook likes and can or cannot (and will not) do. And she is a very creative cook who loves to innovate with recipes that are bold and healthy at the same time. I have to admit that I have been a fan of her blog from the beginning.

My first impressions:
On the plus side: This book is very easy to read because its print is very sharp and very black , on a good quality very white paper. Its typesetting is practically perfect and leaves lots of space between recipes. It keeps the essence of Mathiot’s original French recipes, but adapts them for Today’s busy contemporary cook and uses Anglo-Saxon measurements and descriptions of food components and utensils The 1400 recipes are very clearly organized in 15 distinct groups: Sauces and Basic recipes, Hors d’oeuvres, Milk, eggs, and cheese, soup, fish, meat, poultry, game , vegetables and salads, legumes rice and pasta, fruit, milk and egg desserts, ice creams, cakes and pastries, candies, preserves and drinks. The cuts of meat are described the British and (sometimes) American way, not the French way. But some Americans may not recognize some of the terms she uses that are very British. After all publishing house is English and it is quite obvious in some of the language used. But I understand that this book was published and edited for an English-speaking readership at large, meaning the U.K, Australia, New Zealand, etc, not solely American. The recipes cover a very wide spectrum of products and dishes from very old-fashioned like Garbure soup, ‘’Croquettes of calves’s sweetbreads’’, Rice puddding, or Eel ‘’matelote’’, to more traditional like Coq au vin, Fish quenelles, Bouillabaisse, and Norwegian omelet (a kind of baked Alaska). These chapters are preceded by a very useful glossary, description of herbs and flavoring agents, explanation of various cooking methods, utensils, wines, and a very interesting month by month chart of seasonal food products that you can use all year long. The last section offers recipes of well-known French and Foreign chefs both in France, the UK and the US. There are also some good practical pieces of advice about Table Setting, and Dining Etiquette Last but not least there is a very useful index at the end. Once again everything is very simply explained in plain English. The book contains several beautiful photos of various types of dishes.

On the Minus side: The recipes, in my opinion, are sometimes a bit too simplistic and cryptic for somebody who has absolutely no notion of what French cuisine and cooking is all about. Often it becomes obvious that the original version of this book has been written by a French woman assuming that all her readers (French women) have already a basic traditional French cuisine knowledge in their genes. The new American cook will sometimes have to do a lot of guessing work before figuring out how to move forward to the next step when trying to execute a preparation. Some American home cooks will certainly regret that there are no more precise step- by- step explanations on how to proceed with some recipes. The lack of technical ‘’how to’’ illustrations might be of concern to many users, especially for more unusual or complex preparations. The photos are too often blocked in one section instead being shown directly after the dish that has been described in the corresponding recipe.

As I said earlier some translations are perhaps too ‘’British’’ or still too ‘’French’’for the average American reader. Nobody on this side of the Atlantic knows what an "entrecôte'' (rib steak) is and would never call Veal chops in papillotes ''Veal chops in parcels'' (parchment paper) . The book cover is, at least for my own taste, rather ugly. I suppose it has been designed for the purpose of attracting younger readers. But the majority of drawings and illustrations are charming. I would have preferred more photos shot in various areas and restaurants in France. But altogether it is a very informative and useful book that fills a void that Julia Child had left open.
Posted by Alain at 6:54 PM 2 comments: Links to this post

Labels: French cookbook, Ginette Mathiot, I Know how too cook 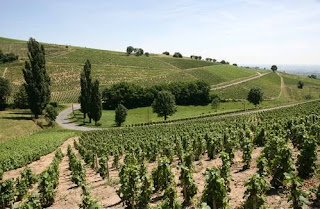