During the 10 days we spent in California last month, both at your house and in the Sonoma County wine district, your mother and I drank several very interesting Californian reds, and I have to admit that some of the Rhône-type wines produced in the Dry Creek district are sometimes as satisfying as the “real thing” from Vaucluse.
But,as it is the case everytime we travel to California, when I come back home, I cannot wait to uncork a bottle of Bordeaux, or anything good coming from the Southwest of France.

It just happened that 2 days after our return to Chicago, I attended a very interesting wine tasting at one of my favorite wine stores in the Chicago area , The BOTTLE SHOP, in Wilmette, IL, whose very astute and decently priced selection of wines from all over the world, is organized by type of varietals. The Bottle Shop always offers some very original and not often found wines from lesser-known producing areas from France. Joe Alter, the shop’s very competent wine director is always happy to guide his regular customers in selecting one that would please their palate without damaging their wallet too much. A couple of weks ago he suggested a very cheap (under 8 dollars) Tempranillo-based Spanish red (if my memory is correct from Navarra) that proved to be the perfect comapnion to a roasted duck breast that evening.

The night I attended that tasting, the wines were from CHATEAU HAUT-SARTHES, from the area of BERGERAC, in the Southwest, not far from BORDEAUX, and more specifically their MONTRAVEL ROUGE 2005, a ve
ry recent AOC (Appellation d’Origine Contrôlée) since it was officially registered in 2001 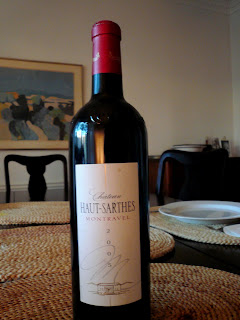 The white MONTRAVEL had been a registered AOC for several years.
But strangely enough these very good wines are not only relatively rarely found on American wine stores, but also not even widely distributed in France where they are under-estimated and under-rated by professional wine critics.

Vincent Ehret, from FINE VINES in Melrose Park, IL, the regional importer of HAUT -SARTHES, came with the owner of that estate, the very knowledgeable and charming Monsieur Daniel Hecquet, a well-known oenologist who was very instrumental in obtaining the AOC label for the red wines of the MONTRAVEL appellation. Monsieur Hecquet owns and manages CHATEAU PUY-SERVAIN in the MONTRAVEL and HAUT-MONTRAVEL areas, a medium size property where tthe HAUT-SARTHES wines are produced.

I had tasted their very fragrant (perfect for summer picnics) HAUT-SARTHES BERGERAC ROSE, several times before this wine-tasting where it was served along the other dry white MONTRAVEL and sweet HAUT- MONTRAVEL, and it has become one of my favorites rosés when I have lunch at KIKI’S BISTRO, on Franklin St. in Chicago, my most pleasant unwinding event of the week every Friday. I also love to drink it as an ''apéritif'', before dinner while I am cooking a leg of lamb and ratatouille.
I also think that the HAUT-SARTHES BERGERAC ROUGE 2005 (60% Merlot, 20% Cabernet Sauvignon and 20% Cabernet Franc exclusively from high-density plantation, hillside, estate vineyards) is as good if not better than many small Bordeaux. This dark-colored but well-balanced and soft wine with good body and good fruit is very satisfying with a wide spectrum of earthy bistro dishes, including lamb stew with black olives, boeuf Bourguignon, and veal stew Marengo. It is a very comforting wine on a cold winter day in Chicago.

Mr. Hecquet conducted the ‘’degustation’’ of his wines in very good English with a lot of very precise comments reflecting both his enormous technical and practical knowledge of wines and his obvious pleasure to talk about them, since he is very proud of his own production.
Creating new approaches and improving the methods for planting and harvesting, as well as the process of vinification per se, to obtain very remarquable wines reflecting the intrinsinc qualities of their terroir and the integrity of their winegrowers and winemakers have been his passion and quasi-obsessionnal objective during his whole life. A life that he spent, since he was a child learning to plant vines, in the vineyards and some famous chateaux of the Bordelais and Bergerac areas (Yquem and Figeac among them).
The man is totally immersed in his passion for the defense of good and traditional wine-making in the Bordeaux and Bergerac zones of production, and was at the avant-garde of the legal fight to obtain a new and less ambiguous classification of ‘’crus bourgeois’’ that should better reflect the actual value of some of these Bordeaux wines.
The 2003 classification was annuled in court in 2007. The new one should be published in 2009.
As I said, Monsieur Hecquet is not only a château owner, but also an oenologist who, for several years, was involved in various expert or executive capacities in trade associations and unions as well as technical and legisalative committees, working very hard to defend the rights of serious owners to make decent wines of good character without interference or pressures from official, political, or trade organizations.
At the end of his studies towards a degree in oenology at the Oenology Institute in Bordeaux he wrote a well-received study while doing his internship at the famous Château d’Yquem, the best-known of the great Sauternes wines.
Perhaps this experience explains his particular taste in developing and strongly fighting for improving the quality of the sweet and semi-sweet white wines of the HAUT–MONTRAVEL and COTES DE MONTRAVEL appellations that are different from the whites from the MONTRAVEL appellation that are dry (made from Sémillon, Sauvignon, and Muscadelle the three main white grapes of the Aquitaine region)

The 3 MONTRAVEL appellations belong to the same family and region as the BERGERAC wines, an area in the département of DORDOGNE, whose AOC was recognized in 1936, located about 50 miles East of Bordeaux.
The wine-producing area of MONTRAVEL, that is comprised of 14 ''communes’’ (townships), is located at the extreme Western end of the BERGERAC area (called Bergeracois) and of the Dordogne departement and many of its vineyards are on small hills that are bathing in the sun while exposed to the sweet and humid influence of the nearby Atlantic ocean.

MONTRAVEL is truly the best wine-growing district of the BERGERAC appellation, and it deserves its own recognition.


At the end of these vineyards, if you drive a few miles West, you are within a few minutes at the heart of the COTES DE CASTILLON and COTES DE FRANCS, and a few more miles farther you enter the SAINT EMILION district.
HAUT-SARTHES MONTRAVEL ROUGE is in fact, like a Saint Emilion, made of 70% or 80% of Merlot, and 20 to 30% of Cabernet Franc (sometimes called ‘’Bouchet’’ in the Bordeaux region).
That results in a perfect mix of fruit, fragrance, roundness and structure, like you would find in a good St. Emilion. And the tannins are so well integrated that they add a marvelous complexity to the wine.
But for such a great and well balanced wine, you will pay much less than what you would pay for a St.Emilion Grand Cru offfering the same qualities of elegance and richness.

Two vintages are available, the 2003 that is very intense and aromatic, with notes of ripe berries, and provides a very long finish, and the 2005, that offers a nice balance of fruit and acidity, with a great nose, and has a very pleasant (still a bit short to my taste- the wine could have been decanted that night, but was not) finish. It is ready and easy to drink now but its great terroir qualities should improve even more from a few years in the cellar. The 2004, a vintage that proved to be much better than initially thought, had some cabernet sauvignon (10%) in it. But it is not available over here.

I was very impressed by both vintages and would strongly recommend it with any kind of beef stew or duck-based dishes like ‘’confit de canard’’, or perhaps even a Cassoulet.