PASTIS, the perfect summer drink This successor to absinthe has been France's favorite apéritif since the mid 50's.

It has a long and sometimes difficult past.


You know, Stéphane, it’s magic. Just reading the word “pastis” and I not only get thirsty but also very nostalgic of my native South of France, where it is the object of a quasi-mystic cult. Especially between May and October when it is associated automatically with ‘’pétanque’’ the games of boules that everybody plays outside in small towns and villages, and also with bullfights. It is the king of drinks during the ‘’ferias’’ (bullfights festivals) in cities like Nîmes, Arles, Dax, Béziers, Vic-Fezensac, Mont-de–Marsan, and many others. In these towns, during these ‘’ feria de toros’’, ''afficionados''' (bullfight fans, and I am one of them) get very easily overboard by drinking pastis not only at the time of the ''apéritif'' (cocktail hour, from around 11:30 AM to 1:00 PM and from 6:30 PM to 8:00 PM), but all day long until the wee hours of the morning. In my native town of Nimes, the French capital of bullfighting where these events take place in a beautiful Roman amphithéâtre called Les Arènes in the middle of the city, the ferias last several days, especially in May (Pentecost Feria) and in September (Harvest time Feria). In the early sixties and seventies, along with some of my school buddies and later with a few close friends, it happened at times that we drank up to 20 pastis a day between 11:00 AM and 2:00 AM during the ferias. But we went only to a specific bar, across the street from my high school and half a block from the bullfight arena that was essentially serving CASANIS, and where the ‘’Chicuelo II pena’’ (band), supporting a young local matador (NIMENO I) was rehearsing… and drinking pastis. I have to admit that the quality of the music started to decrease substantially after the 10th pastis. In fact in those days in Nîmes, some people chose their bar according to the brand of pastis that they served, and there was sometimes (but rarely) a real animosity based on contempt between the patrons of bars serving RICARD or PASTIS 51, and the CASANIS followers 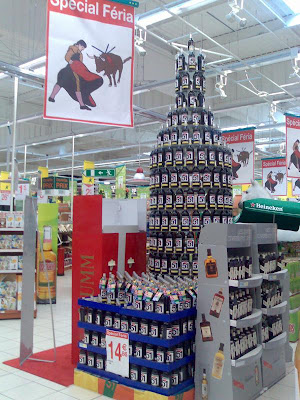 I was talking about a cult. However, that particular religion’s followers belong to separate churches: The RICARD congregation, the PASTIS 51 parish, the CASANIS denomination, the old BERGER BLANC sect, the JANOT true believers, the new apostles of BARDOIN or BOYER, to mention some of the better known brands.

My personal favorite brands of pastis:

Me? I do not drink much pastis too often anymore for 2 reasons: 1. It contains licorice that is not recommended to people who have to watch their blood pressure. 2. It has become too expensive an aperitif for my modest financial means. But when I drank pastis several times a month in the seventies and early eighties, you could find a bottle of Ricard for 13 dollars in Chicago. And I would buy full-liter bottles on Air France on my way back to Chicago for 40 francs until the early nineties. Nowadays, you have to spend between 28 and 30 dollars at large liquor stores like Binny’s or Sam’s for the same bottle of Ricard. It has become a luxury item and I’m afraid that the Euro-dollar exchange rate is not going to make it cheaper in the coming months. Too bad. Your question gave me a furious envy of pastis, especially since we are going through a hot period here in Chicago in late August. But as far as my brand preferences go, I would say that when I was living in Nîmes in 1959-1960, I was a fanatic believer in CASANIS, a brand created by a gentleman named Casabianca in the late forties. It was based on green anis instead of the star anise (called “badiane” in the South of France) used by most of its competitors. It is a very good pastis, usually a little cheaper than RICARD and PASTIS 51, but that you rarely find North of Valence. As a matter of fact I have never seen that brand of pastis served in bars and brasseries in Paris. But when I went to study at the university of Aix-en-Provence in 1960, I switched to RICARD, a brand that was much more common than CASANIS in the cafés where I went. I tried PASTIS 51, made by the old company PERNOD, but I did not like it as much.
And for the last 15 years , when I occasionally drink a pastis I order the marvelously aromatic and natural-tasting pastis made by HENRI BARDOIN at the Distilleries de Provence in Forcalquier, in the Alpes de Haute Provence. This latecomer, launched in 1990, is made from a blend of 50 different plants and spices, most of them harvested in Provence or near the Mediterranean Sea. In France it is more expensive that the traditional commercial brands. But surprisingly, in Chicago, you can purchase a bottle (slightly smaller than its competitors I have to admit) for around $ 27.99 or $ 29.99. at SAM’s or BINNY’s. Its taste is much more distinctive and its flavors more complex than its competitors. By the way, RICARD and PASTIS 51 do not reveal their ingredients, especially what aromatic components and possibly mixed compounds they add, besides the anis, fennel and licorice. It is one of the factors that led me to switch to HENRI BARDOIN that I find has a very natural favor 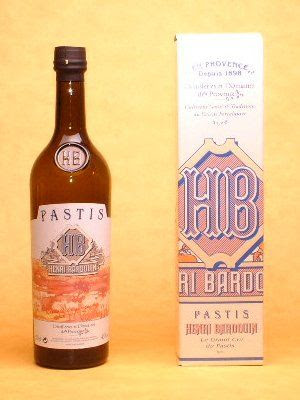 Another good brand is JEAN BOYER, a very elaborate pastis, without any sugar added, made from 72 various plants and 6 spices in a religious community in Fatima. It is the most expensive pastis that money can buy I France. But I do not think that it is exported to the USA. I used to like pastis JANOT, made in Aubagne, the capital of those so pretty Christmas figurines: The Santons. But I did not see any in bars for many years. Two cheaper brands are DUVAL and PRADO 45 . You can find PRADO in some liquor stores like Binny’s where it sells for 10 dollars less than RICARD. It is O.K. but not as good. I cannot stand PERNOD, that has an almost chemical taste and whose anis taste is almost bitter.

Before Pastis was invented, its predecessor, Absinthe, was the most popular drink from 1865 to 1914 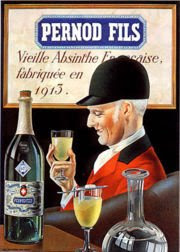 PERNOD FILS was the most popular brand of absinthe, the ancestor of pastis, before 1915. That brand was created in PONTARLIER, in the French JURA mountains that are at the border between France and the French-speaking part of Switzerland. In fact it was a Swiss gentleman named HENRI LOUIS PERNOD. At the end of the 18th century a doctor from Neuchatel, PIERRE ORDINAIRE, concocted the original recipe of ABSINTHE made of a distilled drink based on wormwood spirit mixed with green anis, hyssop, melissa and chamomille. Another Swiss man, named DUBIED, built the first absinthe distillery in COUVET, Switzerland using Ordinaire’s recipe. Later DUBIED partnered with his son in law, HENRI LOUIS PERNOD, and they built a second one on the other side of the French border precisely in Pontarlier. It became so popular that many other French distilleries started to produce absinthe. In 1830, the French troops sent to French colonies in North Africa, started to mix some absinthe in their water to protect themselves from all kind of medical problems. And of course they loved it so much that when they came back home they talked a lot about the benefit of this 68% strong alcoholic beverage, that became instantly popular, especially after 1865 when French wine producers suffered a lot from a massive attack of the phylloxera parasite that damaged a lot of vineyards and reduced by 75% the consumption of wine. At the end of the 19th century, the French were consuming annually more than 13 million liters of absinthe. That is when several French scientists started to do experiments on the effects of wormwood on both the nervous system and the social behavior of heavy absinthe drinkers, and concluded that it could provoke all kinds of possible dangerous side effects, including hallucinations (something that that was never proven). At the outbreak of WORLD WAR I the French government banned all drinks whose alcoholic content was above 16 %. And in 1915 efforts by various temperance and political lobbies obtained a complete ban of absinthe. This is when Pernod opened a distillery in Spain. But it never gained the success that it had in France and Northern Europe and closed after World War II. So they went back to France and started to produce an anis-based alcoholic drink.
The real birth of the Pastis de Marseille

But is only in the late twenties that a young salesman from Marseille by the name of PAUL RICARD started the actual commercialization of an anis-based aperitif under his own name. He had to fight a lot until 1932 to obtain through a lot of political lobbying and after paying many taxes and fees, the right to legally sell the first PASTIS de MARSEILLE. It became even more popular during the period of massive social reforms voted by the “Front Populaire” in 1936, that legalized the “congés payés’’ (vacation time paid by employers), to be ranked the No1 favorite ‘‘apéritif’’ in France. Especially after the government granted Paul Ricard in 1938 the right to raise the alcoholic content of his pastis from 40 to 45 degrees... But, once again, the Vichy government of Maréchal Pétain at the beginning of World War II banned the use of any drink whose alcoholic content was above 16 %. We had to wait until 1951 to be able again to drink legally our favorite apéritif. Eventually the two major brands, RICARD merged with its competitor PERNOD to form in the nineties one of the world leaders in the field of spirits and wines. “Pastis” is a provencal word, a diminutive form of “pastisson”, meaning “mix or blend” as well as, figuratively, “a mess”. In the beginning, the production of Pastis was concentrated in Southern France, and more particularly in a region between Marseille and Avignon. Pastis had more or less the same anis-licorice-herbal taste as absinthe, but did not contain the so called “dangerous” wormwood. But contrary to many beliefs, more pastis is consumed in Northern France than in the South. The right way to drink pastis: In a tall narrow conic-shaped glass, pour one part of pastis, then slowly add ice-cold water (five parts) from a pitcher containing water and ice cubes, but do not add ice cubes in the glass. If you really want to do it the right way but also use ice cubes: Pour the water first, then add the pastis and observe the beautiful visual effect of the golden-yellow liquor giving progressively to the the water an opaline-like cloudy slightly greenish hue. Then add a couple (but no more) ice cubes. If you drink 1 part pastis, with 3 parts water in a small cylindrical glass it is called ‘’ une mominette’’, that in some bars in France they call ‘’ un petit jaune’’. I you add some mint syrup to the pastis it is called a ‘’perroquet’’, with pomegranate syrup it becomes ‘’une tomate’’, and with orgeat (almond-flavored) syrup ‘’une mauresque’’. Drink slowly, with slightly salted almonds, pistachios, olives, and possibly some slices of mountain ham. A ta santé.
Posted by Alain at 1:10 PM